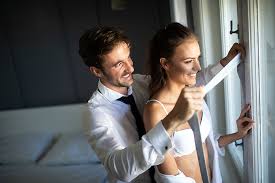 I logged to the Escort site I use and look for any new profiles I like the look of. I spotted one new profile that was set up the day before that had no reviews but a few pictures and information on the lady. Kerra Rock Chick was her name. Thirty-six years old, 5″ 8 inches tall, athletic build, short black hair, piercings, and tattoos. Tight wet pussy, central location, and easy to get along with. The sex your girlfriend won’t have.

Kerra replied within 5 minutes of my message saying she was available now. I was a bit nervous as it was such a new profile with no reviews, but she sounded great so I replied saying I could be with her in 30 minutes and does she have a shower I could use it? She replied saying of course and sent me the address. I replied saying I’ll see you soon and went to get ready.

I quickly trimmed my balls so they were nice and smooth, grabbed some water, jumped in the car, set the sat nav, and set off. When I arrived I sent a text and Kerra replied with the flat number and the code for the buzzer.

Man, my heart was pounding more than my previous meets as the profile was brand new and there were no reviews so I guess anything could be waiting for me. I got to the door and it opened even before I knocked it. I walked in, Kerra closed the door behind me and gave me a lovely deep kiss. She looked amazing in a matching underwear set. I think she sensed my nerves as she offered me a quick coffee so we could chat. This really put my nerves at ease and we chatted about music as it turned out we had similar tastes.

Kerra offered me a shower which I accepted so I was nice and fresh. She showed me where the bedroom was once I was done. When I came out of the shower and entered the bedroom I was pleased to see that Kerra was on the bed and already naked. She looked even better with nothing on and this really got the blood pumping. She beckoned me over so I lay down beside her and we chatted for a couple of minutes.

Keera was now rubbing my balls slowly and gently wanking me telling me how she loves her nipple piercings played with. I had never been with anyone that had nipple piercings before. She had nice small pert breasts, slightly more than a handful and boy were they responsive. After a few seconds of gentle rubbing and caressing her nipples were rock hard.

Kerra asked me to get the wipes that were on the bedside table while she cleaned herself up. We chatted for a few minutes whilst cuddled in together and I was pleased with how easy she was to get along with. I wanted to taste her and really have a good play with her very pretty pussy so I started teasing her gently and she started caressing my balls. I moved down her giving nice soft kisses on the way, her breathing became heavy as I very softly teased the outside of her pussy and clit with my tongue. I put a finger in and was very surprised at how tight she was. I worked her clit with my tongue and slowly entered another finger and built up a nice rhythm that Kerra was enjoying.

Kerra pulled out a condom and put it on seamlessly with her mouth. She hopped on top of me and aimed my throbbing cock at her hot wet pussy. She teased me in slowly, moving up and down every inch of my hard-on. My god, she was super tight and so warm I didn’t think I was going to be lasting too long. Once Kerra had all of me in she started to grind against me and leaned in for a deep slow kiss. Whilst kissing each other she slowly started to ride up and down my shaft. I could have let her do that until I came it felt so good but that would only be a couple more minutes so I suggested we changed positions.

Kerra flipped over onto all fours, who was I to argue about doggy style so I pushed into her balls deep, I left my cock there for a few minutes and played with her breasts and her clit which she really seemed to love. I also did this to stop myself from cumming as soon as we started fucking again. After a few minutes of playing, we started to really fuck. I was pounding her from behind while she was pushing into me from the front, after a couple of minutes I wanted to go on top. Kerra jumped off my cock and lay on her back legs akimbo.

I rubbed my cock over her pussy a few times while Kerra played with her clit. I teased in and out of her slowly while she worked her clit as well. I loved the feeling of her heat and tightness slowly enveloping my cock. I do this for a while then started to fuck her fast. Kerra put her legs up on my shoulders so I grabbed on and we were going at it like rabbits.

After a quick clean-up, we chatted for a bit before I had a quick shower. We kissed after I was dressed and I started to wish I had booked for an hour as my cock was beginning to harden as we kissed. Kerra said that she can’t wait for next time and I said neither can I and maybe an hour of fun next time.

I would see Kerra several more times but not before sampling some of what others offered.